Over the summer I had the opportunity to kick it with Stephane Delisle, the man behind the small podcast Podcrastination. We sat together to have a little chat about all things beer, and also whatever else came to mind. You can hear the two part chat here:

The Home Brew edition is created to focus on the individualistic and personal passions for beer, whether by an individual or a group. I find it important to focus on the smaller aspects of craft beer such as home brewing to emphasize where true brewing starts. And often times expands to something much larger and expansive. Not everyone who home brews makes it big, or wants to, but shedding light on these individuals portrays just how important the beer culture was, is and continues to be. This is where many started their fantastic journeys and where inspiration continues to grow.

Stephane also brews his own beer at home, whether by himself or with few friends. His home brew will be under the banner of Interrobang. His journey as a home brewer began by watching his grand father who was a home brewer as well. It was only a natural course of action for Stephane to follow in the family footsteps as he came of age and naturally began brewing back in 2012. He has since developed his own recipes and feels it may be time to really start to focus on the vision of seeing his brew on shelves. His love for craft is mostly focused on stouts and IPAs, however the focus of his brewing leans more towards the funk and experimental aspect of brewing. Whilst funding always plays a big role in the beer industry, he hopes to have Interrobang start commercially in the next few years.

He was kind enough to shoot me a few bottles for a bit of tasting, and this is the reason I wanted to shed some light on home brewers. They are often over looked as amateurs, yes not everyone can brew a good beer, but there are many out there that do it well in the home brew world. And to me it’s a marvel that some of these individuals are overlooked as just fan boys trying to have a hobby or save some money.

Stephane’s home brew showcased class, quality and phenomenal taste. This conclusion may vary from person to person, as beer can be subjective and situational. This I stress with grave importance. How beer is perceived by an individual will always be subjective, we all have different taste buds, thresholds, likes and dislikes. Beer will also always be situational. Your mood, the environment around you, the weather, and even what you last ate can alter the experience or taste of a beer significantly. Thus any review or opinions of other beer drinkers always need to be taken with a grain of salt.

Thus far I have mostly experienced some of the dark beers he had to offer me, he bottled a fantastic stout and a stellar black IPA. 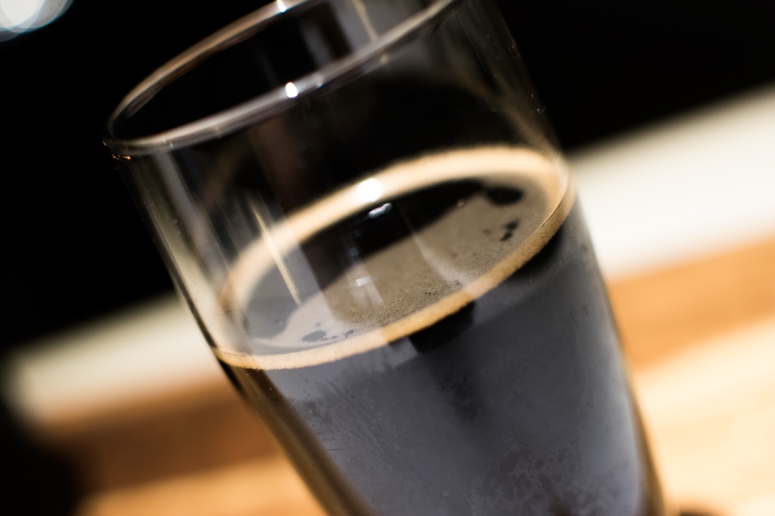 The stout had this amazing light body, yet creamy texture and mouthfeel with an explosive chocolatey roasty character which hit my taste buds like a blast of starburst. This really satisfied the craving of having a nice roasty, decadent stout. It is a very strange thing that when the weather seems to change to cold, as the trees lose their clothes, and as the sun gets shy and hides away early, all I desire is a nice stout to soothe my soul. It is known that stouts, porters and other dark styles are typically the style of the winter time. But it is strange how the body of a beer drinker is so aware physiologically. Or it might be I’m crazy and its actually my psyche that is at play. Either way, its dark beer seasons boys and girls!

The black IPA unfortunately was had pretty aged, but even with age and some dead hops on the nose this beer still had a great flavor which really kicked around the taste buds. Hoppy, bitter, easy to drink, roasty with a light body, and a smooth finish. I can some what predict how it may have tasted fresh, or maybe I just have a Delorean.

I am excited to see where this project goes, hopefully in the next two or three years we might be able to see some big progression! Where were going, we don’t need roads….