Microbrasserie Dieu Du Ciel is the most well known brewery from Quebec, Canada and also carries many beers that are highly rated and sought after, especially their two stouts Aphrodisiaque and Peche Mortel. Moralite, Their collaboration IPA with Alchemist Brewery from Vermont, also sits in the top 50 RateBeer list for best IPAs. There are many factors that make Dieu Du Ciel one of the many top breweries in the world and few reasons are their continual quality, their extremely low prices and their experimental yearly releases.

Dieu Du Ciel continually creates amazingly crafted beer and a large variety of it. There is always something for everyone at Brasserie Dieu Du Ciel. From your over the top passionate beer drinker to your average one and even for the one that doesn’t like beer. Their retail prices continue to amaze me, a single bottle costing only a mere $3 and few cents. What puts Dieu Du Ciel further on the map is their experimental barrel aged beers that are released in an extravagant yearly anniversary event at their St-Jerome location. I had the opportunity to attend this years festivities but, what was meant to be festive turned into a statistical nightmare. With very high limits on the Peche Mortel Bourbon aged and Peche Mortel Bourbon & Brandy aged beers, there was sure to be a riot with the 400 plus people waiting to get some. Most leaving without any, and several of their other beers only lasting about 100 people. I had to wait a good 6 hours before getting a hold of my beer and I was still really content. The wait was painful and even more painful was the fact that I missed out on the Symbiose, Exorciste 2014 and the Rigor Mortis Brandy. But still happy with what I did manage to get and was still very festive indeed! The best part of all, the beers were only $4 a pop for the small ones and about $12 for the larger ones. Dieu Du Ciel still maintained their amazingly cheap prices!

Besides the event mentioned above Dieu Du Ciel has made it’s way as one of my favourites in Quebec. I am sure that any beer consumed by them won’t ever disappoint. Below I have decided to have two vertical trials, one of their Isseki Nicho comparing it to the barrel aged version and the other a battle of their IPA Moralite and the recently released DIPA Immoralite.

Immoralite which was released April 1st as part of their Momentum release came in with a bottle date of already 5 1/2 weeks old. I personally find it immoral to release a double IPA that is already so far in it’s shelf life. It goes against all the IPA and DIPA codes of beer! But as the name entails, it’s craft beer. Craft beer takes a lot of delicate artistic skills and the brewer has a certain vision in mind. With that, I am sure that the brewmaster had specific intentions. Shelfing it for 5 weeks to gain a more complex DIPA to fulfil that vision. Below I decide to battle litte brother with big brother. 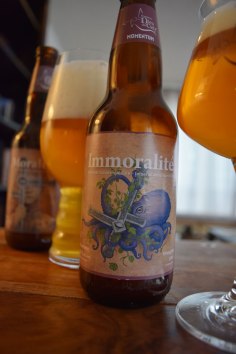 Moralite for me isn’t the best IPA to come out of Quebec, but it most certainly is in the top 4 IPAs from Quebec. My very first experience with Moralite was a real disappointment, not because the beer was lacking but because the beer was past its prime. A very old bottle date, which I only realized much later. Dieu Du Ciel’s older method to date bottles wasn’t as clear and they have since changed it. This IPA is a collaborative brew with The Alchemist that little unknown brewery from Vermont. Who am I kidding, every body knows Heady Topper. And when any one wants to drink a fine IPA from Quebec all they need to look for is a bottle with a great artistic label and the name Moralite. Trust me it’s completely moral to drink this.

Moralite starts with a Nice amazing hop aroma mixed with a sharp bitterness. Not particularly the kind of hop explosion I prefer, this one has intense hop notes that blast into your face but with the accompaniment of bitterness which quickly kills the exciting hop bursts. You could say the bitterness is acting out and is jealous of the attention the hops are getting. This particular lot isn’t as hoppy as I had previously remembered. Although I’ve always remembered Moralite being more bitter than most IPAs I enjoy, I do remember the hops were a lot more prominent. Lot #53 was spectacular, back from November last year.

For me personally releasing it 5 weeks from bottle date doesn’t do it justice. I prefer to have the hops hit me in the face like most DIPAs do. This hop slap is the main factor I look at when it comes to IPAs/DIPAs which I enjoy. Of course beers aren’t only just about a punch of hops, beers are meant to be a bit more complex, leaving the drinker questioning the elements and flavours. Does that mean Immoralite is a failed DIPA? Certainly not. Regardless of the old bottle date I can surely say that Immoralite is a complex DIPA. Like the typical beer talker, i’ll just leave it at that. Complex. Think about it.

The flavours are jumping about leaving you wondering what is dancing on your palate. The nose gives off a mellow hop aroma with some notes of grapefruit. It doesn’t start off with a crazy hop explosion and the flavours that follow for me tend to seem a bit strange. It’s got that weird leather and lychee like flavour coming from it, which I don’t particularly enjoy. I also find it to be very strong. Most of the feedback I received about this beer was really positive, but it’s just not floating my boat. I had previously had this on draft at Vice&Versa pub, and from my previous notes and rating, I found it to be a very flavourful balanced DIPA with a very minor hop explosion. They also released a more fresh batch of this beer with a March date on it, so for those looking for one that is more fresh make sure you have a look at the bottle date! 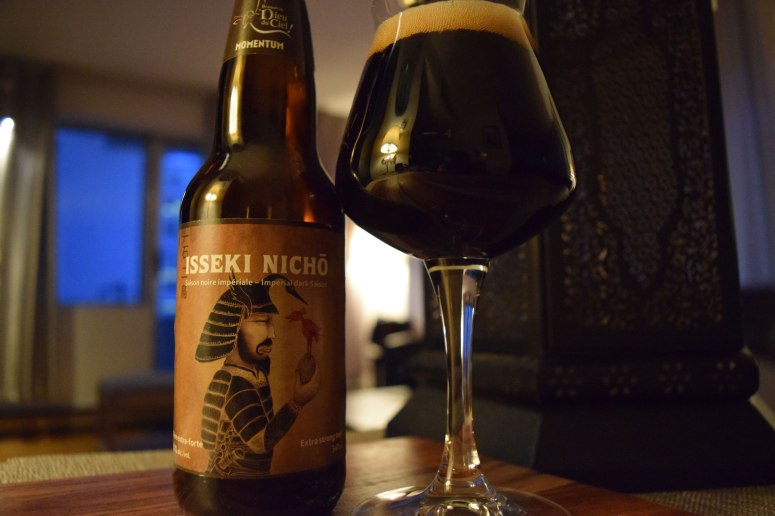 The Isseki Nicho is Dieu Du Ciel’s dark saison beer which gets a Momentum release every fall around October if I’m not mistaken. And although at first I was hesitant to pick one up, I am very glad that I finally did months later. And it fell perfectly in line with Dieu Du Ciel’s Anniversary release, during which they released the Pinot Noir version of this great dark saison and I picked myself up a nice little sixer of it. Dieu Du Ciel from what I have heard has a reputation to not disappoint with any of their beers which are released and with their Isseki Nicho they live up to that reputation. 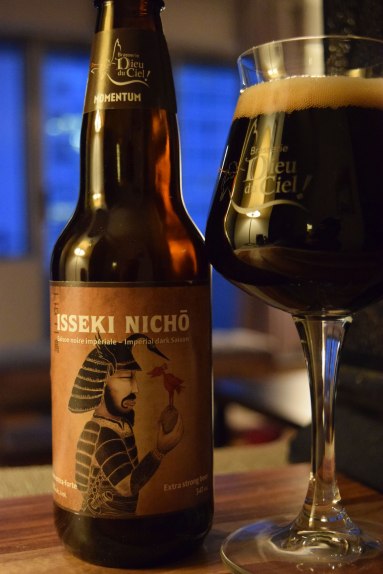 Aroma gives off notes of amazing roasted malts. A heavy mouthfeel and crazy notes of roasted malts, shooting that roasted coffee flavour forward. It has minor hints of bitterness but very quickly fleeting bitterness which doesn’t seem to bother me. I really enjoyed the Hill Farmstead Edith more, which was a bit more tart. A dark farmhouse with a little hint of tartness really sells it for me. But I’m really enjoying the malt notes from this beer. It taste fantastic. 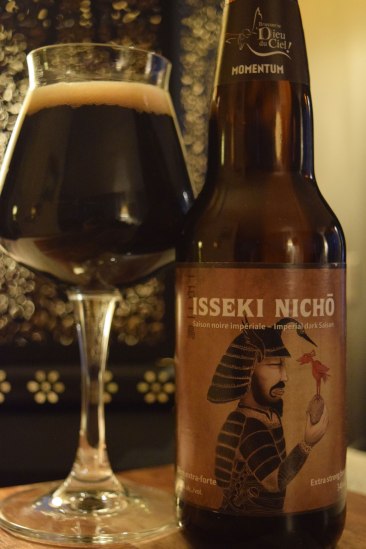 The heavy mouthfeel can be a bit hard to handle. Bottom of the bottle holds most of the bitterness and has a minor rustic sense similar to that of Le Castor Dark Farmhouse. The Le Castor was a lot more rustic but was a lot less mouthfeel and had a lighter body. Emptying out the bottom brought out the beers heavy rustic tones. I thank that I picked up many of these, but even still you can find them here and there easily! So grab yourself some if you havn’t! It’s sure to delight the senses.

You can really smell the difference in aromas between this one and the regular momentum series. The Pinot barrel age has a distinct barrel smell added with a nice sweetness. Much more sweeter than the regular Isseki. Has a minor scent of sourness and flavour is very very sweet when compared to the regular. Where as the regular has a crazy bitterness, this one has a crazy sweetness that shines. The Pinot really overpowers the roasted malts though. I’d enjoy this a bit more if the roasted malts still had the ability shine whilst the Pinot slices the top, kinda like the cherry on top rather than a cherry pie. What I mean to say is I would enjoy this more if the roasted malts were more frontal and the Pinot Noir ageing was more delicate and light. Not to say this is terrible, because it is a great combination.

I also feel maybe this beer aged in Oak barrels might make a nice beer. Overall I’d say I prefer the regular version over the Pinot aged. But the Pinot aged is definitely working well.