As the snow begins to fall, ever so slowly blanketing us with a freezing cold fervor and the songs begin to chime, people begin smiling, sleigh bells are jingalinging, and a fat man in  a red suit seems to be hanging about on every corner. Oh joy, Christmas is here. California doesn’t get winters like Quebec, nor do the major Californian cities see any snow fall. And as I moved away and settled into this frozen tundra we call Montreal, I began to transform myself into Ebeneezer Scrooge. Bah Humbug I’d say to the cold, the snow, and the NOISE NOISE NOISE. Oh wait.. that’s a Grinch Scrooge mash up. Well heck you could say I was a bit of a Grinch too. But then 5 years on here I am sitting in yet another winter. But something a little different has happened. It seems my two sizes too small heart has grown. And as the winter is here, I am smiling and singing and swaying. Oh fuck, wait…. by golly! It isn’t this wretched snow, or the cold, or the NOISE that is making me smile. It is Brasserie Auval!!! Oh happy ether! What a year it has been for Auval. Going from making its debut last year during the fall to winning best new brewery in Canada and 5th best new brewery in the world at the ratebeer festival in the Spring of this year to now a juggernaut and the leading craft beer brewery from Quebec, in terms of popularity and most sought after and rare beers. All I want for Christmas is Auval, and in recent times Monsieur Ben, or Santa Clause, was kind enough to drop few releases of Auval over the past few months. Thank you Santa, uhh I mean Ben. (But really Santa). 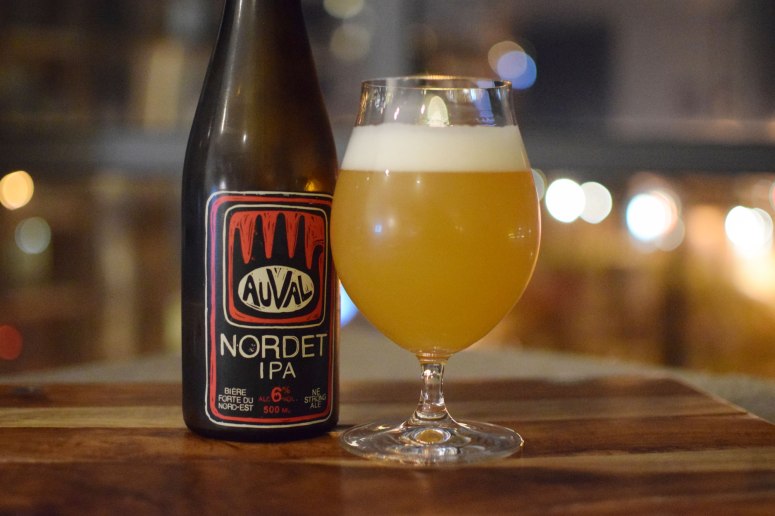 Auval’s Nordet IPA hit the Montreal streets during the early summer and since then it has been buzzing! I was not able to get my hands on it back then, but just recently last month I was able to not get not 1, not 2 but 4! My fridge and my stomach were happy. So was my hop head. I was absolutely ecstatic to be consuming this raved beer. Brewed with the North East IPA style in mind, Ben did not disappoint with the aroma and the cloudy hazy appearance of this beer. The aroma nails the style title to the dot, great notes of hops, fruity, pungent, and bold. The great thing is it doesn’t leave its Auval staple behind. That amazing yeast aroma is also slightly dancing around on your nose, and it is wonderful. 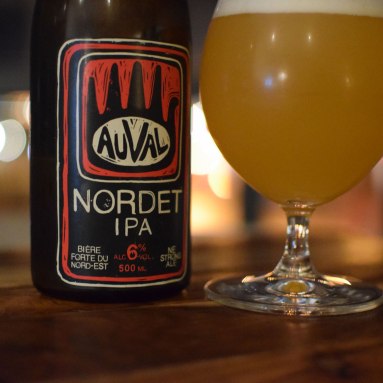 The taste has a wonderful mouth feel, very juicy, very tropical and very hoppy. The bitterness is a light passing memory and all that is left behind is a brilliant balance of a smooth slow dance. You can say it is what a hop head like me has been waiting for from Quebec. Although I have nothing but great things to say about this beer, I do feel the flavors if maybe heightened a bit would make me boogie even more. Although a very wonderful IPA, it is still missing a tad bit more on the attack, and the excitement is too fast fleeting in my opinion. Something is still not quiet there to complete the beer. My comparison notes to this though are it is pretty similar to some of the Trillium IPAs/DIPAs. A very spectacular beer and I would highly suggest is for those Quebec hop heads out there!

Last years Framboese was absolutely out of this world, so I can only imagine how this one would be. My battle with Auval is not one against the beer, my battle with Auval is getting my hands on some!! I wish I could get enough so that I may do verticals, or a fresh and aged comparison. But Auvals beers are so limited here in Montreal and in general so it makes things a lot more difficult. So although a vertical of the 2015 and 2016 might have been a great thing to do, I am more than happy still that I got a chance to get this bottle through some trading power. My senses, my heart, my nose, my mind and my taste buds are ready to enjoy this lovely fruity beer in all its glory. 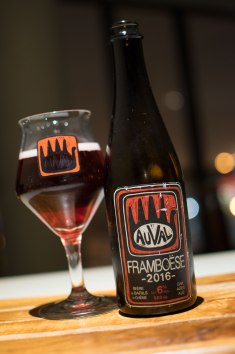 It has a lovely fruity, sour aroma with minor hints of oak. The taste is very wonderful and light and I am really enjoying its mellowness. However the 2015 had a more powerful fruity kick to it if I recall. The raspberry fruitiness really send shivers down my spine and I truly enjoyed the feeling that beer gave me. That amazing raspberry flavor really kicked into high gear with that 2015 version. However, not a bad take away from the beer itself, reducing the fruit attack gives way to a more defined complexity. Another beautiful thing for me is its toned and mellow acidity. The acidity to me can sometimes be too strong and cut in too much into the beer essentially destroying its enjoyment. This beer has all the flavors mixed in and balanced really well. A bit of fruits, some acidity, some sour, some tart, and some great earthy oak notes with a bit of carbonation, all dancing together to perfection. Auval never ceases to amaze me!

Stouts are a thing of beauty, before I really explored stouts I was always under the wrong impression that all stouts contain coffee. But to all those as clueless as me, or maybe I was just alone in my stupidity, no stouts or porters contain coffee, unless specifically noted! It is the roasted malts that give way to a flavor and aroma of coffee. Also not all stouts are super heavy bodied like a Guinness, some are very medium bodied and some are heavy bodied and yet still nothing compares to the heavy heavy body of a Guinness. Pints of Guinness make you strong indeed, but pints of better stouts make you swoon. Such as this beautiful stout from Auval. I think I may have passed out on the floor after my first sip. Already one of my favorite stouts to come out of Quebec. Aged on cacao nibs to absolute perfection that even that 7.8% ABV feels like a minor fleeting gust. 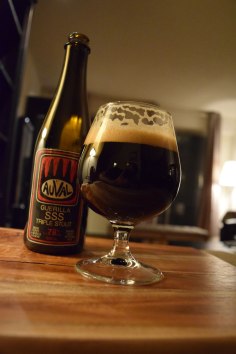 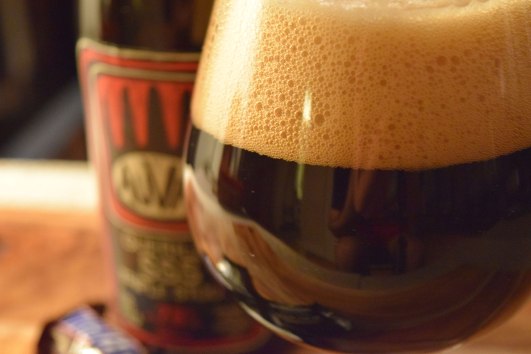 That smell is absolutely phenomenal! Rustic porter and chocolatey and I cant get enough of the aromas of this beer. Now when I drink this beer it is as if I turn into Ronald Weasley from Harry Porter as I say to myself “Bloody hell it’s amazing!” A great blend of roasty malts along with the intensity of the cacao nibs turns this heavy abv beer into a majestic chocolate delight. My kind of stout in every aspect of description. It is absolutely out of this world. The sellers on this beer for me are the chocolately roasty hoppy bitter notes that all combine together in harmony to create the most perfect balance! The chocolate is shining a lot more and the hints of the roasty malts and the very nice bitterness are melding in very well. The bitterness is a bit strong, but strong in a sense that it pushes the flavor forward rather than depleting its majestic-ness. I say to thee you hold the crown good lad.

Another one of those, I wish I had a vertical on these bad boys. But a delight none the less to get to have them as stand alone beers. The Grisette series for me has been a wonderful endeavor for me, in my last article I covered #1 and #2 and now I will finally cover #3. All have varied slightly but all in my opinion have been fantastic. My personal favorite however would be #2. 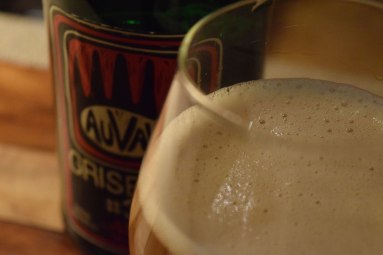 Numero 3 has a very nice light, crisp aroma. The flavor itself is very light and not as bold, sour, or spicy as the previous Grisette versions. This one is a bit airy with not too much flavor. It is really different and really not as dry as I expected. A bit carbonated too but still very enjoyable. A very mellow table style beer in my opinion.

One thought on “Auval: Ghost of Christmas Present”