Dieu Du Ciel has a very interesting concept of releasing beers according to the four seasons. These beers include Equinoxe du Printemps (Spring), Equinoxe D’automne (Autumn), Solstice D’hiver (Winter) and Solstice D’ete (Summer). All of them are very sought after and all of them are very highly raved beers. They are not difficult to find and can be enjoyed by all! However they are only released one month of the year. During Dieu Du Ciels anniversary event, the Solstice D’hiver and Equinoxe du Printemps are released as barrel aged variations and are worth getting your hands on. The Solstice D’hiver so far is my favorite barley wine and the barrel aged version is beyond fantastic! Equinoxe D’automne is not bottled and is no longer found at the brew pub anymore. The last known time to my knowledge was back in 2012. So for this article my focus will be on another beer which is released during the Autumn season and which I would personally consider the best choice as an autumn offering from Dieu Du Ciel. None other than one of my favorite Dieu Du Ciel beers, Isseki Nicho!

Brewed once a year, aged four to five months and released during the winter during the month of December. This beer represents strength in all its forms, the aroma is boasting, the flavor is stomping and the appearance is as darker than a winters day. The winter has just begun, and we require a little bit of strength to pull us through. These gloomy days can only call for enormous amounts of beer drinking and essentially a clearing of our cellars. Spring cleaning? Meh, beer drinkers do winter cleaning. Makes us stronger and able to survive the doom that inevitability awaits us. A big bold Barley wine at 10% abv, this is Dieu Du Ciels way of keeping our hearts warm in the month of December. Our current bliss has just recently surpassed, Christmas is over, new years eve went by too quickly. But after all that excitement you are left with the four longest months of the year. Maybe stock up on these for those coming long months. And so this beer has been crafted for our delights, our blanket, our comfort, our Dieu Du Ciel.

Brewed only once a year in December and aged for two months and released around February, as part of the momentum series, this beer is to remind us that the winter has only just really began. The heavy snow is falling, the cold bits harder each day. But do not fear, just like the feeling of stepping into the warmth of your home in -30C weather, this beer sends the heat running through your body. A scotch ale weighing in at 9% abv. It’s a sure drink to warm your senses, your heart and your mind. Mind, body and soul as they say become one. The force is strong in this one. The force is strong in his family, his father has it, he has it, his sister.. uhh Bourbon BA brother has it. My personal preference is the barrel aged variant, it is much bolder and stronger on the flavor points. I would highly recommend it if you are able to snag one through trading or maybe at the Dieu Du Ciel anniversary release that is usually during the month of January. 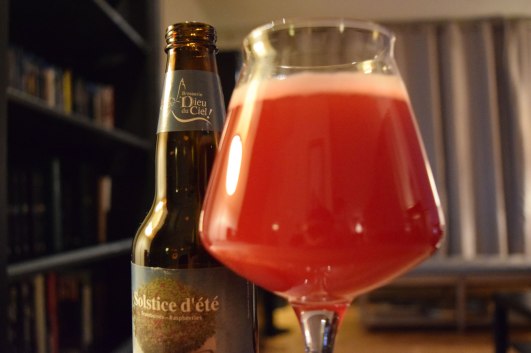 The sun shines high above the blue sky, there is sound again in the air. Birds are chirping, bees are buzzing and so too is DDC Solstice D’ete. It has returned like the delights of summer. Wait… but its too hot! (Do us Montrealers ever stop complaining about the weather? NO!)  As refreshing as drinking a cold glass of water in this boiling summer heat, Solsctice D’ete is a beautiful fruit berliner that is just about perfect for the summer. Just as the hot summer sun is burning your skin and frying your brain. A cold pint of this beer is sure to send the chills down your spine and refresh your brain and likely after a few, things may seem a bit hazy, but hey blame that on the intense heat. Your not drunk, it’s a minor passing heat stroke that is making you delusional. There is a good excuse for your wife/husband/boyfriend/girlfriend/mother/father/sister/brother. .

Although there has not been a sosltice D’Automne in over 4-5 years and was never bottled, there is a great beer that can be enjoyed in the relaxing fall weather.

The dark farmhouse. The summer is over, fall is here, and the gloom is slowly starting. But until then good cheer because it’s not so hot anymore, but I need my jacket. And so take a farmhouse style beer we can enjoy in the summer and make it roasty dark for the fall. Fitting, and great in my opinion. It is putting a jacket on a blast of sunshine and turning it into a warm bodied, dark, delicious, glass of awesomeness! This one is probably my favorite Dieu Du Ciel beer and the barrel aged variant of the Isseki is out of this world.

With a release for every season, as well as other months in-between, Dieu Du Ciel is always a delight to have around for the year. And as each year draws to a close I await the next years goodies. This year I was sure to stock up on any momentum beers which are considered to age well, so my cellar is stocked with Isseki Nicho and Grand Noirceur. You can say I am prepared for a momentum drought until the next year as well as stocking for the brutal winter ahead. These beers are produced in high quantities and can easily be found in some secret corners stores as well some even more popular stores, so don’t fear! I believe I was still able to find 2015 Isseki Nicho up until May 2016. Also to keep in mind Dieu Du Ciel has an incredible line of barrel aged variants which are released 2-3 times a year, keep your eyes peeled for Dieu Du Ciel’s anniversary this month, soon to be announced!