Microbrasserie La Memphré, located in Magog in southern Quebec, is a brewery I have yet to explore. The city of Magog, as many craft beer geeks may know, is en route from Montreal to Hill Farmstead Brewery in Vermont. And I know many of us are always traveling down south to the land of beer fandom often, so I would say no excuses! It is on the way and a stop should be a must! Currently you can find few of their bottles in stores around Montreal but that is soon to change as they are releasing more beers in bottle. So far I have heard some fairly great things about this brewery and on a random night walking around Saint Denis street I decided to stop over at Le Saint Bock for a few pints before heading home for the evening. And to my surprise, I was able to find some beers I had not given a try, one of which was La Memphré Hopwit de Session. Since such time and seeing various bottles being distributed my interests in La Memphré have been sparked. Most recently the Double Menton made its way into retail stores and I was ecstatic to give this one a try. 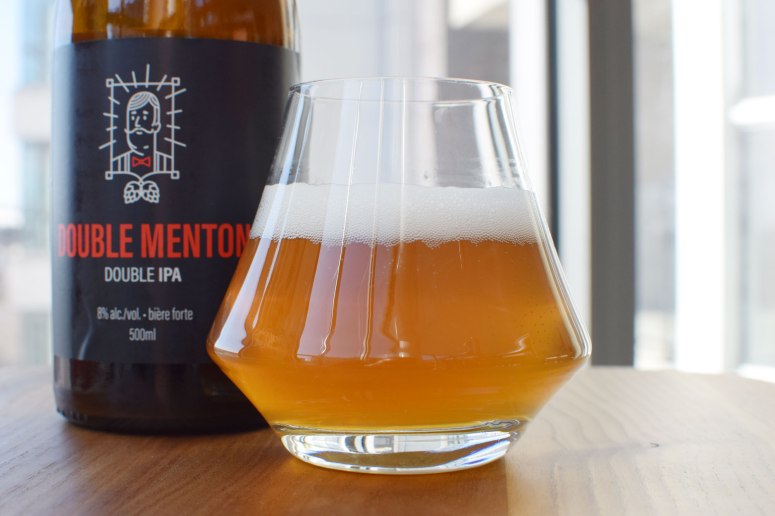 A friend of mine mentioned to me this beer is a must have beer from La Memphré, and when he informed me it will be bottled soon, my eyes widened, my heart skipped a beat and the excitement rose. Once it hit the shelves I made my way over to my local bottle shop and snagged one of these goodies. 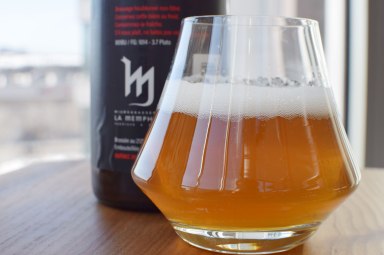 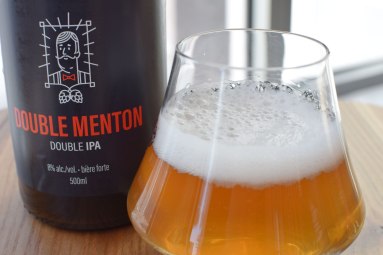 The nose is very similar to Auval Super A in my opinion. It has a great load of hops, with that Quebec yeasty profile most of the DIPAs seem to have. It has got aromas of fruits and no booziness on the nose and the appearance is mildly hazy. The taste starts with a nice palatable fruitiness, followed by some citrus and finishes very cleanly with a minor bearable bitterness. I would say it’s very smooth for an 8% ABV. A great DIPA on par with the likes of Auval and some of the other great DIPAs and IPAs hitting shelves. It does tend to have a bit of a butteryness, which I have observed in most DIPAs coming out of Quebec, notably Super A. Butter is a weird tasting note, I agree. But it refers to a rich creamy mouth feel and flavours reminiscent of butter. This is only acceptable in low levels and is considered a defect in higher levels. Quebec DIPAs like Auval Super A and La Memphré Double Menton have utilized it at appropriate levels and it adds just a little bit of an interesting character to the beer.

I am super excited to see breweries in Quebec getting a hold of creating hoppy, fruity IPAs and DIPAs which can rival the southerners. Continue to do us proud Quebec! 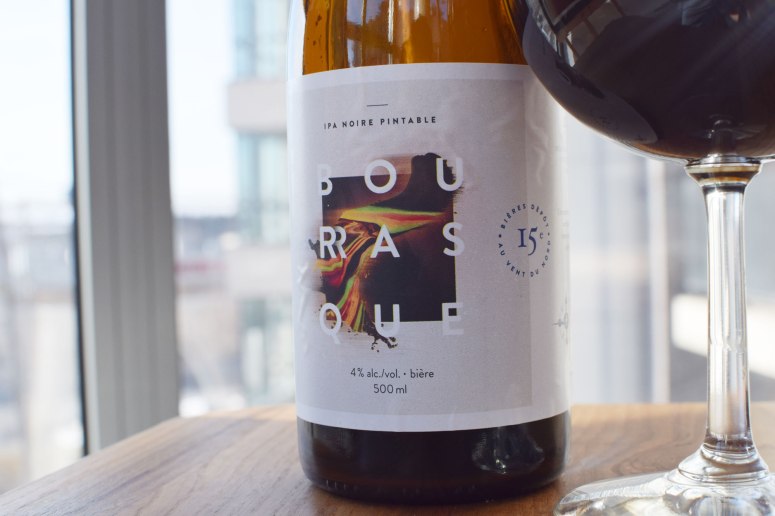 Brewed in celebration for the 15th Anniversary of Au Vent Du Nord, a beer store located in Sherbrooke, Quebec, this is a “pintable” black IPA. The low ABV on this beer makes it fall into the category of pintable, meaning easy to drink and consumption of several usually follows. What’s funny is a Budweiser is 5% ABV. So when us craft beer drinkers consume sessions or pintable beers, they are actually what the regular beer consumers would consider a normal beer. But for us it’s a session! Woot woot!

I only saw the date on this before opening and it’s sitting between five to six weeks old. Which shouldn’t make much of a difference. IPAs are good to last in my opinion till the six or eight week mark. Depending on the beer you could even push it to the standardized shelf life of twelve weeks. Personally I like my IPAs within the three week mark, but cans of Trillium, Lawsons, and The Alchemist are known to hold up pretty well over time.

Aroma of this beer has crazy notes of roastyness coupled with a weird soya sauce malty staleness. This is not to say that the taste will be bad, with IPAs the aroma always goes first but the taste maintains for several weeks after. The body is very light and starts out pretty watery maintaining the wateriness throughout. It has a great tobacco and coffee finish which rests lightly on the tongue, one the characteristics which I absolutely adore. Has a kick of bitterness in the middle, which rises sharply, but dissipates quickly. Kind of like when you have beer goggles, and you go from six to midnight, and then snap to reality, and then go from midnight to six. (I swear I’m actually a very respectable man, sometimes my brain just takes me to weird places). Very light very pintable, but at the same time very enjoyable and the flavours although mellow are enough to keep this beer interesting.