Dieu Du Ciel is a local Montreal brewery which is known worldwide and a local favorite here in Montreal as well as all over Quebec. One of my favorite beers from them is their Isseki Nicho Pinot Noir, which can only be snagged at their special release at their St Jerome location once or twice a year. The regular version can be found in the month of October every year as part of their Momentum release. And is definitely much easier to get a hold of. For this vertical I will be comparing the regular Isseki Nicho. There is something about this beer that keeps me returning for more and more. It is the perfect example of a beer that has a hint of saison with the prominent roasted malts, a recognizable trait of a stout or porter. In other words, this beer is so fucking METAL. Blacker than the blackest black times infinity. Because this beer is strong I decided it would be a fantastic idea to try the regular versions in a vertical. Splendid init! So all at once I cracked open the 2013, 2015, and 2016, and the wife came home later that day to a very smiley husband. She thought it was because she was home after a long days work and I was elated to see her, little did she know…. 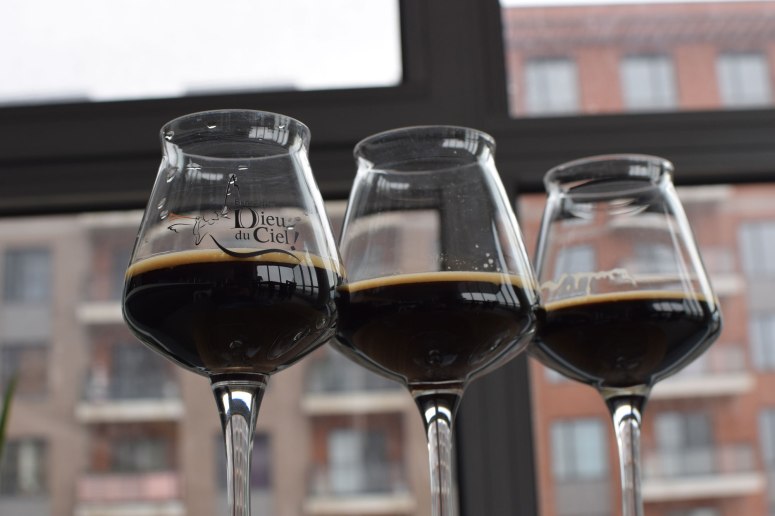 For this vertical to work as productively as possible I utilized coffee beans to kill my nose while getting the aromas of each beer and used pine nuts and raisins to blank out the taste buds. Palate fatigue is a real thing and when doing tastings it is essential to ensure you have various kinds of palate cleansers. The best method to cleanse your palate between tastes is to consume room temperature water and unsalted crackers. Do not have salted foods as the salt can alter the taste buds ability to taste accurately. 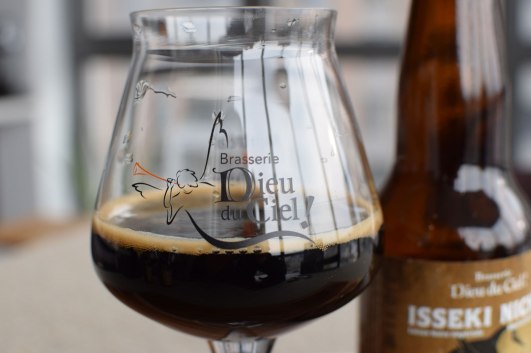 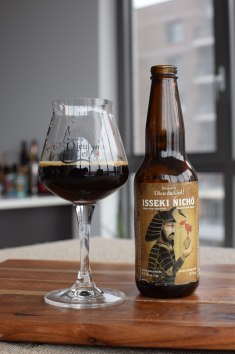 At over three years old, this can be a potential risk. Although you are able to age certain beers, it does not mean that they age well or should be aged. Sometimes it can create unsatisfactory results. The aroma on this one gives off a strong caramel malt and a strength that lingers on the nose. It appears dark like it should and the small head remains around for a while.

On the taste it is wonderfully smooth and not as strong as the nose may have suggested. The flavors in general are a bit dulled out so I’m not getting many flavors apart from a tad bit of malts. I can get a sense of some of the roasted malts but they do not have the same impact as a more fresh Isseki. It also has a very light tobacco and coffee feel with a tad bit of bitterness. Everything about the beer is very subtle overall. Aging 3 years is the way to go if you are looking for a more balanced and subtle kind of beer, but, if you prefer something that is more vibrant, I would suggest having this fresh, within 1 year. Each batch can also vary considerably, so each year may vary slightly. As time goes on and after several sips, the bitterness increases and you can feel a bit of the burn. 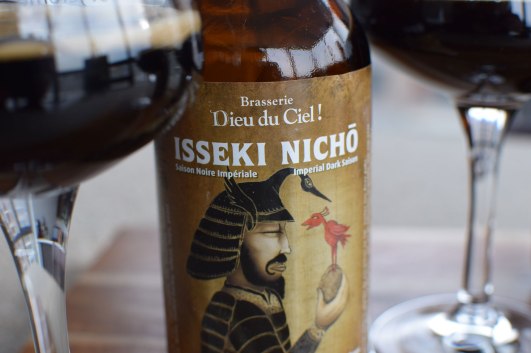 A lot more hidden aromas as compared to the 2013 version but you can feel more of the  roasty malts, where as the 2013 had a more malt kick on the nose.

The 2015 has the best aroma for me. Light, yet roasty and very serene. The 2013 is a bit strong and the 2016 is a completely different smell all together, we will get to that shortly.

Dark as it should be with a tiny line of foam. To taste it has more of a bitterness but the coffee feel and tobacco feel is a lot more prominent, which is the icing for me, but, the bitterness is also pretty bold off the bat. Its flavor attack is bold and running around the palate, but also has a strong bitterness dancing together. Which can be a bit of a killer, but the bitterness works well overall and balances smoothly at the end. I recall consuming the 2015 sometime early in 2016, and it was a lot less bitter. The taste lingers with a lovely and very distinct tobacco, coffee and bitterness on the tongue.

The 2016 version I found was far different in all its aspects compared to the 2015 and 2013. I feel that maybe they took a different approach with this one as the aromas are more hoppy along with a wheat aroma. Barely any roasted malts are kicking my nose.

On taste this one is different all together. It has a more hoppy feel to it with a much lighter body. I would say the yeast and hops are more prominent and the coffee tobacco notes are duller. The bitterness isn’t strong in taste, but is certainly strong in its lingering on the tongue during its finish. This one although different than I recall from the 2015 batch fresh, has a great drink ability making it much easier to enjoy. The 2013 and 2015 require a bit more digestibility and can take a while to stomach.

Well, it would not be a complete tasting if I didn’t have some fun with it, so after some consumption of each and a bit of a wobbly brain and vision. I suddenly heard Bill O’Reilly’s voice in my head and it screamed  “Fuck it, we’ll do it live!”

Aroma becomes more rustic and the taste balances out a bit more. Blending the two makes it pretty solid actually! It takes the good points of the flavors of the 2015 and mellows out the different flavors of the 2016. But it increases the bitterness level a lot!

Aromas are still overpowered by the strength of the 2013 and the taste becomes a bit of a mess. Drain poured it…

Aroma is pretty interesting on this one. The taste isn’t half bad, but, the 2013 blended is making everything very brutal. But on its own the 2013 is not a drain pour. It is just very mellow. The 2013 on it own is actually more preferable than the blends.

Out of all three I would say I the crown goes to 2015 for its aroma and taste. For the 2013 although still fairly enjoyable wasn’t my particular preference and in this case I would not age an Isseki Nicho for more than 6 months. However, the barrel aged bourbon version is my mistress and she can stay with me as long as she likes or you know until eventually grows old, bitter and harsh. Kind of like a spouse no? I kid I kid!

One thought on “Isseki Nicho: Killing not two but three birds with one Stone”