Now lets be honest, is Beaus Brewing really a neighbor? I mean it is only really a short 1 hour 10 min drive away from Montreal and just on the edge of the border of Quebec and Ontario. Also it is distributed in large numbers in our deps and grocery stores! That part was a bit tricky, but Beaus managed a way around it and made it work. For all intents and purposes Beaus is not a brewery from Quebec so I have placed it under my doing our neighbors series. Seems only fair!

Note: This is my series focused on our friendly Neighbors, where in each article I will cover a brewery, a beer (or several), beer stores, craft beers bars and many more! Recently I did some re branding on my blog and decided to keep my focus mainly on Quebec, however I am a beer fanatic and couldn’t avoid writing about some of the other great beer out there. Thus I created two different series which will cover outsiders and impostors. The second series to be revealed sometime soon!

P.s. My older articles may not have these distinct titles. But read them still for some insight!

So back to it then. Recently myself and a good friend in the blogging world all the way from Manitoba, Mr. Beer Crank, took a road trip to Ottawa while he was visiting Montreal during the summer. It was only a given that we stop over at Beaus on our way to Ottawa and so the decision was pretty simple. Stop at Beaus. 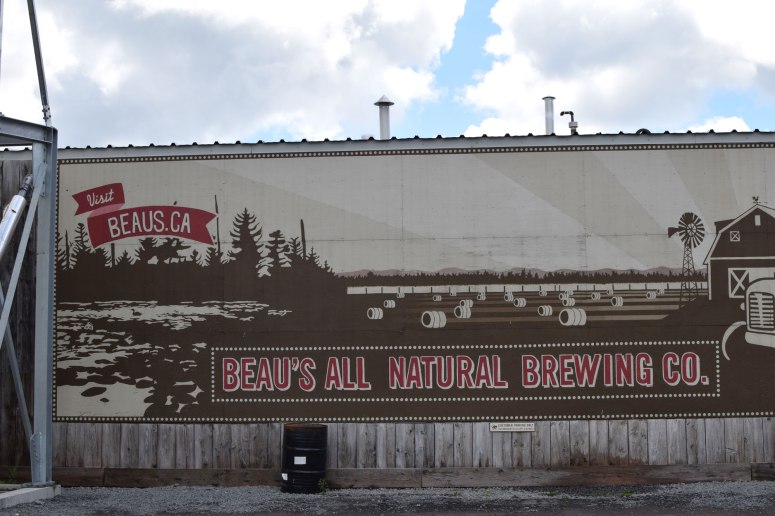 We were greeted at the brewery by some extremely friendly faces. And none other than Jen Beauchesne was at the helm of it all. But few additional beautiful faces made the experience all that much better, Andrew and Patrick I’m talking about you! Welcoming us with very open arms into her family/Employee owned brewery, it was a great experience to stand in presence of greatness and benevolence. It was a very happy moment for the craft beer community in the midst of all the commercial giant buy outs, when Beaus dropped the news that it was selling out. Selling out not to the big boys, but selling out to US! It is now equally run by all of its employees rather than banking on a large sum and bowing down to a corporation, kudos Beaus, that is by far the most impressive move! My personal connection with Beaus has in all honestly been a hit or miss, but some of the recent beers they have been throwing out there have beer truly awesome to drink down. Maybe it’s the feeling of alcohol rushing through my veins… uh.. rehab? Guys I should really go to Rehab? It’s okay guys, relax. It’s a hobby (More like an excuse). Is this joke too old? Maybe. So back to what I was saying, some of the beer I have been consuming from Beaus in the past year and more has really been some solid stuff and I am every grateful I can get my hands easily on their product in Quebec.

Visiting the brewery was a great experience and I am always interested in going to the source. There is a part of me that is just curious and excited to go visit a brewery where some of this ether is produced. So, to be on site is always great. Unfortunately when you have a chatty fella like Cody alongside you and you are the designated driver, that can be a mix of exciting and uneasy experience. But! I’m happy to say that seeing this guys smile and overall glow (see photo below) makes me feel content I was able to fulfill his trip checklist! I am all for spreading smiles. And this chap has that happy smile! 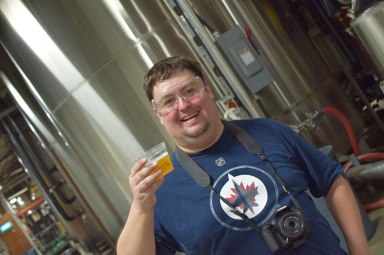 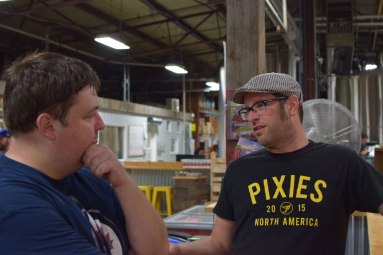 Cody pensive as ever, oh wait, is that Steve?

Our morning started out with meeting three very friendly and gorgeous individuals who gave us some tasters to start out and then gave us a walk through of the brewery. At the end of the extensive tour, they decided we needed some more alcohol shoved down our throats, so we had more tasters. Well I didn’t at least, since I had to drive (Never drink and drive folks!), I would get some pours but only have few sips for the sake of tasting, science and ahem… ahem… untappd. Steve made a quick appearance during all of this and it was an absolute pleasure to say hi to him. As well as meeting his associate, Fina Uwineza, who is starting an all woman owned brewery in Rwanda! Great to see some movement in the African continent, especially something so awesome as an all woman craft brewery! We were also blessed with another appearance from none other than Bryce McBain from a separated barrel project Halcyon Barrel House, under the Beaus moniker. Correct me if I’m wrong! He is a pleasant individual and a solid guy to have a chat with and also very busy busting out some awesome bottles.

I was very humbled with the warm welcome from everyone at Beaus and it was an absolute honour (yes I spell that with a U) and pleasure to visit the brewery and be able to wander about and drink some goodies. Of course I walked away with some stuff (thanks Jen!) and so here are some thoughts below!

An aromatic I.P.A. in the contemporary West Coast style. Big tropical fruit gives way to pine, courtesy of American and New Zealand organic hop varieties. With its bold flavours and balanced bitterness, you’ll want to save a permanent spot for Full Time I.P.A. in the beer fridge of your heart. 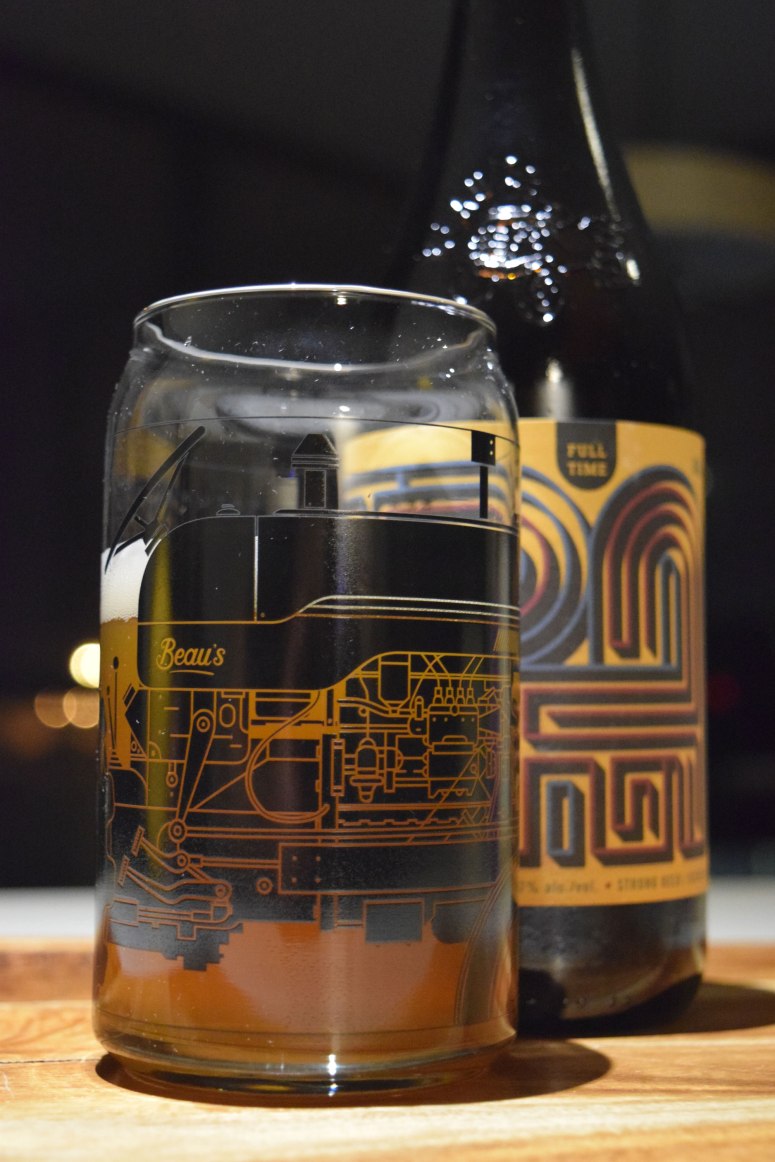 When I first heard about this beer hitting the market my skepticism peaked a bit I wont lie but, it also peaked my interest. My taste buds didn’t really fancy some of the hoppy contraptions from Beaus, but I’m always stiff for a new IPA. It is kind of like when any local IPA hits the market I protrude like a meerkat, and I mean that literally not figuratively.  The aroma on this beer is solid, I am getting great notes of hoppy, soapy hops with hints of tropical bursts. The taste is just wonderful just like a lemur my eyes widen with joy, can someone explain to me my obsession with African animals? This beer for me is a lot more solid on draft but, even in bottle it has those great notes of hops and an easy balanced clean finish with minimal bitterness. It has that great fruity kick to it that is just dancing around, like a hyena rolling on the floor and laughing. Enough with animals. All round it’s a full time IPA. And its available all the time! I made a funny. This means I’ll put it on my list but will rarely buy it, just because you know theres wayyyy to much beer to try. But this IPA among many others has def made my list for beers that I would buy all the time! It’s just got everything going for it, it’s hoppy, it’s fruity, it’s a tad bitter, it’s easy to drink and it has a great finish! 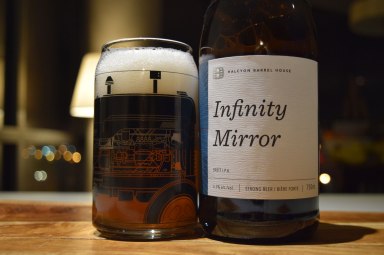 Rate beer calls this a Sour Wild Ale? However according to the label it is an IPA aged with Brett. It does kind of meld into the field of a wild ale maybe, but definitely far from a sour. Not to take away from this beer as far as categorizing it goes this beer really sends  a great rush of Niagara falls up your a**. The aroma has a nice fruity kick to it, followed with some great floral notes. The taste is extremely bold, bretty upfront with a light sliver of floral notes kicking in. It is light clean with a minor bitter funky finish. The brett for me isn’t overpowering but very well balanced and dancing and playing with the IPA notes in great harmony. Has a really nice floral taste (did I already say that?) that is carrying the brett through and the hops are balancing in an almost slow dance. Everything is actually working really well, it’s got the funk, the floral, the bitter, the hop and everything else that follows. “We need the funk, we gotta have that funk”

There is a lot happening at Beaus Brewery, and I would like to send a special thank you out to Jen, Andrew and Patrick for such a warm welcome and for their absolutely unwavering hospitality! Excited to see which new beers come out Beaus and Halycon.

More on this can be seen Here!

One thought on “Doing Our Neighbors pt. 2 // Beaus Brewing”