Vox Populi, born for the people. Coming to creation out of Boucherville, Quebec, Vox Populi, came to light for me with a collab I heard about with Dunham called Le Cerbère. Although I never got a chance to try this beer, it sparked my interest in the brewery. Fairly new to the Quebec market, Vox Populi has really made a name for itself quickly especially since Vox Populi does not as of yet have a physical brewery and currently brew out of Oshlag. The reason I admire this brewery so much is because it lives up to its name. Vox Populi means the beliefs and opinions of the majority. How do they brew for the people? By have a rotating hop series IPA for which each month the people vote on the hops they want to see showcased and the majority vote wins! Democracy at its finest.

Vox Populi produces many a number of beers and they are run by some very down to earth and friendly folks! Below is a run through of the few beers I found stood out the most for me thus far. I still have to venture further in their beers, there is a lot I have not explored yet!

Citra is by far one of my favorite hops to be used in a Pale Ale, IPA or DIPA. When it is utilized as a mono hop I love it even more. Vox Pop Citra was a pleasant surprise for me, it has a great wall of fruity tropical hops, that come up your nose like marching ants. The taste has almost a jelly, fruity sour which is followed by a bold kick of bitterness. The bitterness stays through out the beer, and I don’t say that as a bad thing. I love IPAs that have a bitter bite to them to accompany the Juicyness. It adds a bit more complexity and the harshness really compliments a fruity IPA.

My very first taste of any Vox Populi beers was the Double Fruit Punch which I consumed at Mondial in 2016. At that time I was not impressed much by their beers. But after having tried several other beers and especially after having this Vox Pop Citra IPA (Which was actually consumed a long time ago when it was released, sorry for the delay David and crew, this article has been a long time coming!) my excitement for this brewery grows.

Another one of the Vox Pop IPA series which garnered some excitement for me was the Simcoe. I am usually not a fan of Simcoe, as I find the hop to be a bit sharp in comparison to some other hops. In the alpha acid value it is not any higher than others, so I do find it strange that this hop in particular does not settle well with me. However, after this IPA, I really get how Simcoe can make an IPA taste unique and dynamic. This beer is very fruity with that sharpness accompanied as well, but it utilizes that sharpness to lend a complexity to the hops rather than taking over my palate.

It is very light and easy to drink, and has just the right amount of bitterness for me. The finish is what I enjoyed most when it came to this beer, the start was fruity and strong while the finish was very clean with lingering fruits. A perfect way to smooth out and complete this beer.

It may not have been the most popular by majority sake, but in my book this is a solid stout from Vox Populi. Do I consider it a milkshake stout? Maybe not, I do not feel as though the lactose and vanilla add much to a style that is already meant to be sweet at times. But it does add just a little bit of a creaminess to it and the extra vanilla kick is nice. I do however, miss the tobacoo finish and the roasty kick. Overall it’s a very easy drinking stout and on any given day I can kick back few of these with great enjoyment! 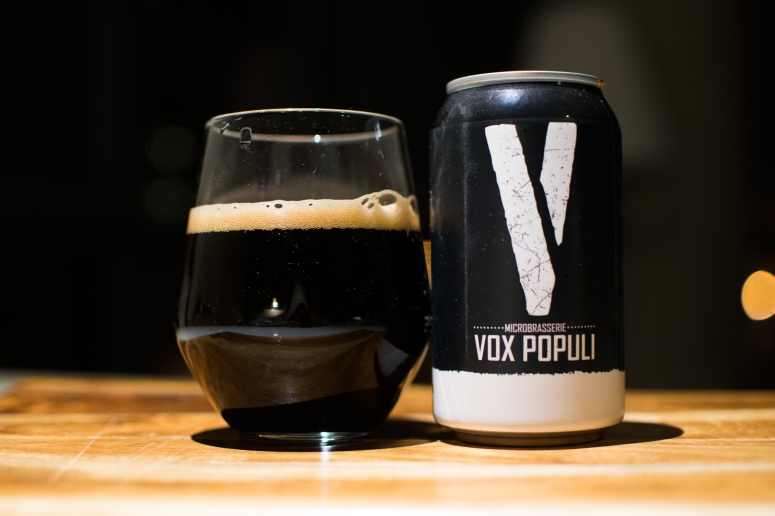 So who benefits with this amazing set up? The people of the brewery? More to come from them as I continue to consume their beers!